Views and URLconfs in Django

Let’s start simple. In this section, we will create a web page that outputs “Hello Django”. To do this, open views.py located in the djangobin app (i.e myapp/django_project/myapp) in your favorite text editor. At this point, views.py should look like this:

Delete everything and enter the following code.

We have just created a simple view function.

So what’s a view function?

A function whose job is to accept a request and return a proper response.

Let’s step through the code we have added one line at a time.

Every view function takes an argument called request, which is an object of type HttpRequest. The HttpRequest object contains the information about the current web request that has triggered this view.

We create URL pattern using url() function. It accepts two arguments, a regular expression to match the URL and name of the view function to call for this URL.

Let’s create a URL pattern. Open urls.py file located in the Django project configuration directory (i.e myapp/django_project/django_project). This file is also known as site-wide urls.py. The contents of urls.py file should look like this.

Note: Comments are removed from the above code snippet to save space.

To bind the index() view function to a URL pattern we need to do two things:

The contents of the site-wide urls.py file should now look like this:

Start the Django development server if not already running using ./manage.py runserver command and visit http://127.0.0.1:8000/. You should see a page like this:

Don’t forget what Django calls view is actually a controller.

The path() function accepts many other optional parameters, one such parameter is name keyword argument. The name keyword argument allows us to give a unique name to the URL pattern. So why should we give names to our URL patterns? Defining a name allows us to create URLs automatically in our templates and views. We will see how it’s done in the lesson Creating URLs in Django. For now, let’s give a name to our newly created URL pattern.

Our URLconf at this point contains only two URL patterns – one was provided by Django and the one which we wrote ourself. So what would happen if you request a different URL? Open your browser and try visiting http://127.0.0.1:8000/django/.

If the requested URL doesn’t match to any of the existing URL patterns in URLconf then Django throws a 404 error. As the requested URL is not defined in the URLconf, Django will throw an HTTP 404 not found error. Here is how it looks: 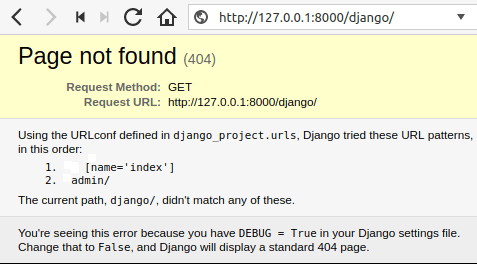 The important point to note about this page is that it gives way lot information than it is required. Notice that it exactly tells what URL patterns Django tried from which URLconf before throwing an HTTP 404 error. Sure, this is sensitive information and should be disclosed only to the people involved in the development of the web app.

So, If this information is sensitive then why Django is revealing all this in the first place?

To turn off the debug mode set the value of DEBUG to False. When debug mode is off Django outputs a generic HTTP 404 response without any sensitive information. As we are currently in the development phase keep the DEBUG setting to True.

Right now, we only have one application named myapp in our Django project. Generally, a project consists of at least 3-4 apps. If we keep writing URLconf for every app in the site-wide urls.py file soon it would become a mess. So instead of mappings the URLs directly to site-wide urls.py, we can make our application modular by creating urls.py for every application, that way we can manage URLs much more efficiently and easily. To do so, first create urls.py file inside the myapp app and add the following code to it.

Above first two  lines we are importing necessary function and module. In line 4, we are creating URLconf for the myapp app.

The next step is to inform the Django project about the URLconf of the myapp app. To do so, modify the site-wide urls.py as follows:

The include() function tells site-wide urls.py file about the existence of urls.py in the myapp app. The important thing to note here is that in the regular expression 'index/' doesn’t have a trailing $ character instead it has a trailing slash /. This is done so because whenever Django encounters include() function, it chops off whatever the part of the URL matches up to that point and sends the remaining part of the URL to the included URLconf for further processing.

Digging deep into the URLs

Let’s see what happens when you request a page.

2. Then, Django reads the value of variable ROOT_URLCONF from Django project’s settings.py file. So what’s the role of ROOT_URLCONF?The ROOT_URLCONF contains the URLconf which must be loaded first. It is also known as root URLconf or site-wide URLconf. In our case it points to urls.py located in myapp/django_project/django_project directory.

3. After reading ROOT_URLCONF, Django checks each URL pattern one by one in the root URLconf with the requested URL until a match is found. If a pattern is not found, a 404 error is returned.

4. On the other hand, If a pattern is found then Django calls the associated view function. If the second parameter to the path() function includes a call to include() function then Django chops off whatever the part of the URL matches up to that point and sends the remaining part of the URL to the included URLconf for further processing.

Here is an example:

Let’s say the requested URL is http://example.com/time/, the first thing Django does is to remove the host portion of the URL. After stripping host portion http://example.com/time/ becomes /time/. The string /time/ is then checked against each URL pattern one by one, until a match is found. If a match is found, corresponding view function is called. Otherwise, an HTTP 404 error is returned.

The view function we created in the above section was very simple, nonetheless, it introduced you to some basics concepts like view functions, URL patterns and how Django processes the URLs behind the scenes. In our next view, we will output some dynamic content. Let’s create a simple web page to output current date and time. If you have done some Python programming then you may already know that Python has datetime module for working with date and time. Here is a quick refresher on how to use it:

It is important to note that above the snippet is pure Python and it has nothing to do with Django. To return current date and time we first have to create a new view. Open views.py in the djangobin app and add a new view function called today_is() below the index() view function as follows:

Let’s step through the changes we have made in the views.py file:

We have added a new URL pattern to map /time/ URL to the today_is() view function. You are probably getting the hang of this now. Start the server if not already running and visit http://127.0.0.1:8000/time/. If everything went fine Django will greet you with current date and time.

Dynamic URL is a URL which contains one or more variable part that influences the output of a webpage. So far we have created only static URLs.